Do you enjoy the movies? At this theater, you may never go out…the way you came in. Now, turn off your cell phone. Dim the lights. Shhhh...the feature is about to begin. It's showtime. 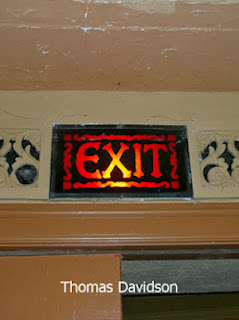 This new story, EXIT, is featured exclusively on Booktrack. It's dark and deeply demented. For story and soundtrack, click HERE. Have a horrendous Halloween!
Posted by Thomas Davidson at 7:45 AM No comments:

[This piece originally appeared 10/22/13 on the crime blog, ALL THINGS CRIME.]

Wait. Before we open the door, let's go back two months. On December 3, 1973, a record was released in the The album's titular song would hit the airwaves, enter the national eardrum, and set the "musical" stage for one of the strangest cases in FBI history. Now, let's return to that chilly February night.

Eight kidnappers burst in with guns drawn. The boyfriend was thrown to the floor and stomped by a dedicated communist masseur. His 19-year-old fiancée was dumped into a car trunk. Seconds later—screams, three shots, screeching tires…history.

Next morning, the name Patty Hearst circled the world.

Who's there?
What's there?
Open the door and say hello to…
Synchronicity.

's most famous fugitive since Dr. Richard Kimble was on the run for the next 19 months, until her headline arrest in September, 1975. Millions know the electrifying story. Until now, the strangest part of this crime saga has been hidden in plain sight. Years ago, vintage rock deejay "Jurassic Jim" Fleetwood connected the dots and went public. Jeers followed. "Alas," Fleetwood said, "the sign of a true visionary is an arrow in his back—next to the bullet hole." WikiLeaks has released FBI documents that vindicate Fleetwood's assertion.

In a nutshell, a "cosmic quirk" occurred in the spring of 1974, after the Symbionese Liberation Army demanded that the captive's family distribute "$70 worth of food" to every needy Californian (think Oxfam with a desperado twist). However, the weird-o-meter of life throttled up to a solid, pants-piddling 10 when Patty's surreal odyssey banged a sharp turn into Carl Jung's Twilight Zone.

You may reasonably ask: What's Patty Hearst and a pop tune got to do with Swiss psychiatrist Carl Jung? This: the term synchronicity was coined by Cosmic Carl to express a concept about an acausal connection of two or more psycho-physic phenomena. What we perceive as coincidence (e.g. you spend two sleepless, tweaktastic weeks on crystal meth, then join a public tour of the West Wing of the White House) is often something deeper and not chance driven (e.g. the universal human need to be noticed by the leader of the free world as you claw your chest and shake like a paint-mixer).

Now, chew on this. Throughout the time Patty Hearst teamed up and hit the highway with the SLA, what was the #1 album in ? What song shook the soundtrack to the 1974 zeitgeist? Come on…ah…

Answer: Paul McCartney and Wings. Band on the Run.

It gets better. Remember the album cover? A dark alley at night. A group of outlaws dressed in black. A police spotlight. 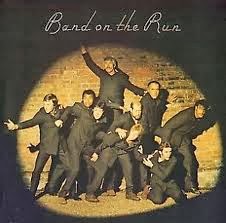 (Paul started it all)

Coincidence? Please, put the glass pipe down and get a grip. This is synchronicity. Feeling faint? You should. That's not cottage cheese dripping onto your shoulders—your brain just exploded. 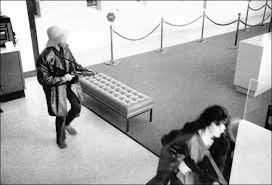 ( roadies checking the stage design prior to the performance)

Picture it. April 15, 1974. A ho-hum Monday morning on freakin' tax day. Maximum bore. Unless you were lucky enough to be inside the Sunset District branch of the Hibernia Bank at 1450 Noriega Street in San Francisco. That's where Dr. Jung's theory was literally caught on surveillance camera, officially crossing the criminal line. Patty was photographed wielding an M1 carbine while making an unorthodox cash withdrawal. The camera snapped a babe in a rakish black beret barking financial directives to bank customers. And who better to offer free fiscal advice at gunpoint than a Hearst heiress? 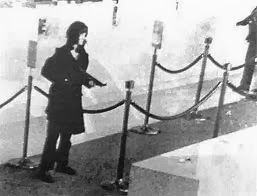 (note the quartet of dancing shadows on the floor)

Now. Drumroll. The blast-your-brain Jungian moment of synchronicity. The paranormal collision of Patty and Paul. Beret and Beatle. When a band of bank robbers met a Band on the Run. Among the iconic surveillance pictures, one grainy image shows four shadows on the shiny floor, near the velvet ropes that lead to the bank tellers. This explosive shot has been compared to the Zapruder film of the JFK assassination. Four members, beyond the camera's eye, are backlit by ceiling lights. A freeze-frame of finger-poppin' choreography. Song-and-dance shadows. SLA bank robber #1 sings lead. SLA bank robbers #2, #3 & #4 sing backup. Classic call-and-response.

bandit #1 pumps fist, drops to floor with legs split, bounces back up like a cheerleader on crack. Cheering customers give standing ovation.

[To topple the pillars of fascism, the understood that redistribution of wealth could be achieved through entertainment. Dazzle the masses with tight-ass dancing, and the cash will come.]

bandit #1: "All right everybody…purse and wallets on the floor…Then poppa gonna show you…how to dance some more!"

Shadow #1 does a back flip without dropping his M1 carbine, kicks out legs, hits the splits, pops up, shoots ceiling—pop-pop-pop—while sliding across tile floor on knees à la Bruce Springsteen.

(The Temptations – the greatest assault weapon ever seen on stage,
with lethal vocals and high-capacity-magazine footwork)

Reached by phone last week, an anonymous eyewitness recalled, "Those four men. They lined up like a firing squad. I was scared to death. But Lord Jesus, they did a line dance. Like they was the Temptations with firearms. They danced and waved those weapons. Dancing bandits? I never seen nothing like it. Holy Jesus, imagine blagging banks in your beret and salsa shoes. Dash in, wave a weapon, and do the Boogaloo at Wachovia while shouting, ‘Everyone on the floor…the dance floor! That’s right. One, two, three—drop! Hit it, people!’ Goodness, what fun. I mean, come on…rob Citibank while dancing the Skank in front of the security cameras? What kinda world we live in?"

Answer: a world of cosmic confluence. A big shout-out to Carl Jung in the afterlife—Doctor J, you put the shoop-de-shoop into quantum physics. Welcome to banditry, berets, bullets and a backbeat. It all began with a rock record release. So jump up. Slap on your ballroom shoes and dance the Skank at Citibank.

[Thomas Davidson would like to thank Carl Jung and "Jurassic Jim" Fleetwood for their valuable insight.] 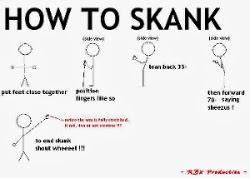 Thomas Davidson is the author of two quirky thrillers, THE MUSEUM OF SUDDEN DISAPPEARANCES and PAST IS PRESENT. His nonfiction has appeared in The Boston Phoenix; and is excerpted in the national bestseller Missing Beauty by crime reporter, Teresa Carpenter. His comic fiction has appeared in MudRock: Stories and Tales and The American Drivel Review; crime fiction in A Twist of Noir, Powder Burn Flash, and All Things Crime. His literary humor column appeared at The Electronic Drivel Review, ADR's online supplement. He lives in the area.
Posted by Thomas Davidson at 7:09 AM No comments:

Charles Murkle ("Bad Luck Chuck") is widely regarded by the FBI as the unluckiest crime victim in history. His stroke-inducing story, "UP," appears today on the stellar crime blog that's so good...it's criminal: ALL THINGS CRIME. Read it here, then drop to your shaky knees and be thankful this crap never happened to you. 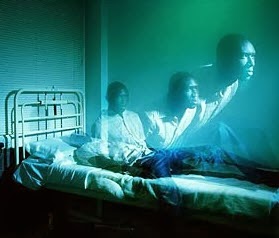 If you have a Google Chrome Browser, you can read and hear this story (replete with disturbing music and harrowing sound effects) at Booktrack. Hear it here. 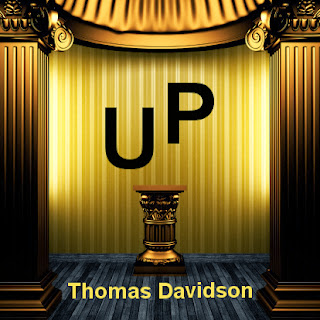 Posted by Thomas Davidson at 4:20 AM No comments: