(self-defense tips from the righteous Master of Love) 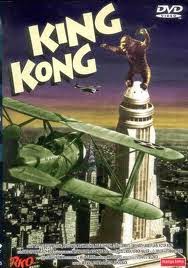 My piece on Mr. Kong's last hour, and righteous last stand, can be found HERE at ALL THINGS CRIME BLOG. This is "stand your ground" the way it was meant to be. 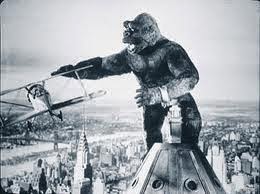 Mr. Kong swatting planes and singing the Drifters' "Up on the Roof"

"When this old world starts getting me down
And people are just too much for me to face
I climb way up to the top of the Empire State Building
And all my cares just drift right into space
.....Up on the rooooooooooooooofffff.....
Posted by Thomas Davidson at 8:00 AM No comments:

The Bermuda Triangle is actually the Bermuda Trapezoid, defined by points in Bermuda,  , and . 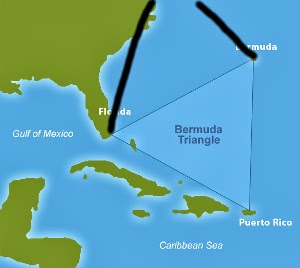 The Bermuda Trapezoid is infamous for "swallowing" cargo ships and airplanes. American sunbathers crossing the on air mattresses are especially at risk. Recently, a Royal Caribbean ship cut short a 10-day cruise after 700 passengers and crew fell ill with vomiting and diarrhea. The captain admitted, "The ship passed near the edge of the Bermuda Trapezoid for five measly minutes—then the sh*t hit the fan. It was a gastrointestinal tsunami."

So last year the U.S. Navy put traffic cones on the Bermuda Trapezoid sea lanes for sailing safety. Their bright orange color ensured visibility, even at times of maximum distraction (e.g., Godzilla appears, flips your air mattress). If you cruised between the floating cones, you wouldn't vanish or time-travel to 2040.

On Dec. 5, 1945, a squadron of five U.S. Navy torpedo bombers disappeared during a routine training exercise. Sixty-eight years later, several hundred cones vanished from the choppy waters near the . Coincidence?

Before losing radio contact off the coast of southern , an airline pilot was reportedly heard saying: "Everything looks strange, even the ocean," and "We are entering white water, nothing seems right. Traffic…traffic cones have…invaded our air space…"

Lewy Koogler, age 40, was sitting inside Fort Lee Cineplex, watching Cloudy with a Chance of Meatballs 2. Brats jammed the matinee. Lewy, a lifelong fan of animated movies, sat alone in the dark amid flying candy and popcorn hail, spellbound by foodimals and cartoon violence. The spell popped when an orange traffic cone dropped through a time/space portal in the theater's roof, and landed on his lap. For a fuzzy moment, he saw a tall top hat for a Dr. Seuss cat. Lewy cried out, confused, clasping the cone as if he were under attack. Excited, he hyperventilated, his head thrown back and eyes rolling.

Amid the laughter of hundreds of children enraptured by Meatballs 2, an adult's strangled cry rose above the din.

Within seconds a beam of light blinded Lewy. A teen usher appeared, pointing his flashlight at a pop-eyed adult rubbing a traffic cone on his lap. The usher grimaced and turned away, whistled, his flashlight beam finding another usher at the top of the aisle.

Within minutes the Fort Lee Police arrived at the theatre.

The arresting officer scanned the crowd of kids, turned back to Lewy and said, "You towering turd of turpitude!"

"You're under arrest." Officer #1 whacked the road marker with his nightstick. "Lewd conduct with a sex toy."

Handcuffed, Lewy was whisked outside to a patrol car, and booted into the backseat.

On the drive to the Fort Lee Police Station, Officer #2 turned to his partner at the wheel. "Cuffing perverts gives me munchies. Let's get some donuts in ."

Soon they were midway on the , heading into . Lewy was having a EMERGCON-level panic attack. "This...this can't be happening. Pull over, I gotta puke."

Officer #2 turned, shook his fist at Lewy. "You touch your cone…"

Then it happened. A squadron of five U.S. Navy torpedo bombers, circa 1945, suddenly appeared in thin air directly over the bridge.

The bombers opened their hatches. Traffic cones rained from the sky like cluster bombs, landing upright in perfect rows on the GW Bridge.

The bombers whooshed into the clouds, time traveling to 2040 or beyond.

Before losing radio contact from the bridge, Officer #2 was reportedly heard saying: "Everything looks strange…Godzilla is in the ex toys line the highway...We are entering a pointless traffic study…"

Posted by Thomas Davidson at 3:34 PM No comments: